ElectroBarn is the face of Dave Anderson, whose experience with Macs dates back to the era of ridicule.

Dave cut his teeth on an Apple ][+ and has never strayed far from these roots.

His professional career started in the world of printed circuit boards and oscilloscopes and then transitioned through Mac OS X drivers (for the same PCBs) to Mac and iOS Apps.

Last month I was asked to present at iPhone Dev Camp #6. I gave the organizer a few topics that I'd had some recent experience with that I thought would be relevant and three were selected. When I checked the Dev Camp website, however, I could see that I was listed as presenting "Lesson 99". So I decided to run with Lesson 99 as a theme. This is my compilation of notes and opinions as influenced by search results indicating that Lesson 99 was Beekeeper Or Bee-haver .

See also Part 2 and Part 3 for the other topics.

A BEE-HAVER is someone who can say they “HAVE” bees but they do not want beekeeping to consume their time or interest, so they spend little to no time keeping bees, they simply have bees. That’s certainly one approach.

Then there are those who want to evolve from just having bees to truly doing all they can to make sure their bees are as healthy as possible. 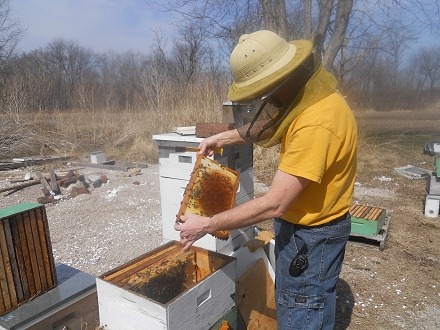 AKA "Stop making your keyboard cry!"

I'm going to assume some familiarity with Obj-C & Cocoa and look at some basic tips for improving your code (Obj-C is the language, Cocoa is the application frameworks.)

Why do I care about this? Because when you inherit one of my projects I want

You should be able to skim my code and quickly see what happens in each class.

Syntactically permissble but you're making your keyboard cry

This fundamental difference in method naming in ObjC may be difficult to grok at the beginning but improves code readability and should give you hints as to what parameters are required. The behaviour should definitely be clear.

Getters should be the name of the ivar/property, and shouldn't include the term "get".

We Read More Than We Write

Be descriptive. Objective-C and Cocoa are designed to read well.

Beware of methods starting with new, copy, create – they imply specific memory management and may confuse ARC (and other developers!) Note: create has implications for CoreFoundation and CoreGraphics code (not necessarily Obj-C).

The things that happen when you tap a button. The method name is the response, not the state.

When the button is tapped, this method is getting called

This message passing is decided at run time and is totally dynamic, so there's no need to create static associations between a button and a method. An IBActionisn't an button or event handler! (IBAction is actually #define IBAction void)

Why is this a big deal?

By defining the state in which you expect a method to be used, you're immediately and artificially limiting any other use. You're also giving no cues as to the behaviour of the code in the method.

What happens when the blue button is pressed? Do you care that the button, 3 revisions ago, used to be blue?

Will the sender always be blue? Login? a TouchUpInside?

If you name it per proper convention, then its no big deal when 3 different buttons are all connected to smokeTheHive or when the button that triggers showSettingsPopover: gets changed 36 times over the course of the project - their actions that will happen are always clear.

Use enumerations for groups of related constants that have integer values

Use const to create constants for floating point values

In general don't use the #define preprocessor command to create constants. (e.g They won't be available in the debugger.)

Define constants for strings used for notification names and dictionary keys. By using string constants the compiler can perform verification.

Add methods to an existing class or break up an implementation into multiple files. (Can't add ivars or properties)

Then in combination with the new NSArray literal

And a non-literal improvement coming in Xcode4.4 is that @synthesize becomes optional!